What is the AJET Musical?

The Japan Exchange and Teaching Programme has been promoting international understanding in Tokushima Prefecture and elsewhere in Japan since 1987. It recruits young men and women from all over the world to join local communities as language teachers and international relations officers. There are currently some 95 JET participants placed at schools and government offices in Tokushima prefecture.

The Association for Japan Exchange and Teaching (AJET) is the organization that represents most JET participants and coordinates many of their activities. In Tokushima, the highlight of the AJET calendar is the musical, which has been a major annual event for the past 25 years. Past productions include  “Hercules: Awa Hero” (2016), “Rapunzel” (2017), “TokuSing: Tokushima’s Got Talent”(2018), and “Aladdin: A Whole New World” (2019)

Our performances use both simple English and Japanese to entertain and communicate, including many popular songs from both languages. We perform at several venues across the prefecture to ensure that as many people as possible can see the musical. In the spirit of cultural exchange and education, the AJET musical has always been a non-profit project. Entry to all performances is free of charge.

We look forward to seeing you at the next musical!

With the first case of COVID-19 confirmed in Tokushima, we have decided to cancel all performances. For more details, see our blog post: Show Cancelled 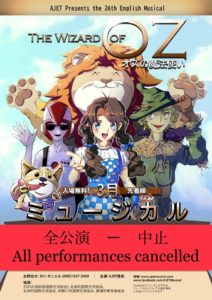